German troops invaded the Netherlands on 10th May 1940 and the Queen and government were forced into exile in England on 15th May. The administration of the country was put into the hands of Dr Seyss-Inquart, with local administration continuing but under German direction and control. The Dutch postal service continued in operation, but a higher priority service, the Deutsche Dienstpost Niederlande, was set up, staffed entirely by German personnel, for the needs of the German occupation admininistration. The first offices opened on 5th June 1940, at den Haag (HQ), Herzogenbusch and Zwollen, followed shortly by Amsterdam and Rotterdam. Eventually 39 towns had offices connected to the Dienstpost operation in the Netherlands. 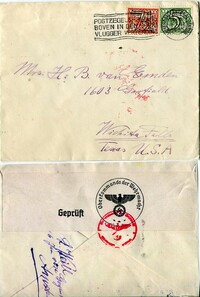