During 1938 and 1939 Hitler prepared plans for the invasion of Poland. Hitler secured a non-aggression pact with Russia in August 1939, giving Russia "the right" to take over Finland, most of the Baltic States, and parts of eastern Poland, in exchange for German freedom to invade the main part of Poland. Britain and France confirmed their support for Poland but this was insufficient to thwart Hitler's plans. A fake Polish attack on a German radio station at Gleiwitz ("Operation Himmler") provided Hitler's pretext for invasion.
Date of use :
Next day, 1st September 1939, German units crossed the Polish border. Feldpost mail should exist from this date.
German troops crossed the Vistula on 5th September; Cracow fell on 6th September. By 9th September, German tanks reached the outskirts of Warsaw, but the capital held out for some time.
Russian troops invaded eastern Poland on 17th September, and reached Lwow in Galicia on 22nd September. On 23rd September German troops withdrew to the Brest-Litovsk line (the old border of 1914), making this the new German-Russian frontier.
Following a severe aerial bombardment, Warsaw finally fell to the Germans on 27th September.
German troops secured all points of the Baltic coast by October 1st; the Polish fleet surrendered on that date, except those ships at sea which made their way to England, along with some members of the Government who were able to set up the Exile Government in London.
October 6th was the date when any remaining units of the Polish Army surrendered.
Area of use : This section covers German Feldpost mail during the initial occupation period, from anywhere in the area of the former prewar Poland; and then after the establishment of the Generalgouvernement, only within the GG (including Galicia).
Postal Function : The Feldpost service was available both for mail from soldiers on active service, and for mail addressed to them. Normal mail was sent post free. Supplementary services were sometimes available, for a fee. All mail had to bear the 5-digit Feldpost number of the field post office which served the soldier's unit. Mail was not supposed to give the location of the unit, though sometimes unit cachets, censor cachets, or postal cachets (as on the item illustrated) gave an indication of origin.

Feldpost Numbers known :
28597
These numbers are known to have operated in the Polish area, at some stage during WWII. The list is not complete, and these Feldpost units may also have served elsewhere at other stages of the war. Readers, if you can add numbers to this list, please send an email!
Withdrawn : On 13th September 1939 the Deutsche Dienstpost Polen was set up to handle both Feldpost mail and official administrative mail. This was quickly changed to the Deutsche Dienstpost Osten for political reasons (Poland was supposed to exist no longer). The D.D.O. took over the S.S. Feldpost on 1st May 1940, and all field post operations on 15th May 1940, so Feldpost mail ceased to exist in the GG at this point. In June 1941 the pattern was repeated when German troops invaded eastern Poland (then under Russian administration). From September 1941 the Dienstpost took over mail distribution in Eastern Poland (Galicia) before the normal GG post was set up. 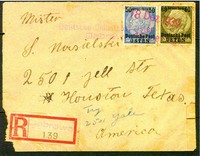 During the invasion, virtually all postal and telegraph equipment was destroyed, both through the acts of war, and by deliberate destruction by retreating Polish army forces and postal employees. The Germans set up a military Postschutz group (postal salvage) to rescue or restore remaining equipment. Initially they operated close behind the front line, providing the Feldpost service, and later they established the main Dienstpost offices for the German administration.
Postal Purpose : Some existing Polish cancels (both regular cds and straightline cachets of other types) were rescued. Where these were unavailable, provisional straightline cancels were made with rubber type or any available emergency material. The emergency cachets were particularly needed in villages or auxiliary offices. Auxiliary offices were supposed to impress the cachet alongside any stamps, which would then be cancelled elsewhere, at the main post office. However, many were used simply as cancellers, and particularly so on philatelic mail. Initially the need was genuine (commercial or "real" mail is scarce, sent under the difficult conditions of the invasion, and items with faults are to be tolerated), but soon troops were sending philatelic mail with these cachets as souvenirs (normally fresh and clean; some may not have travelled).
Localities : provisional cachets or cancels are known from the following offices :
Dabrowa
Jaslo
Wadowice
Readers who encounter other similar cachets from this period, please email us and we will add them to this page.
Withdrawn : These provisional cachets were normally withdrawn as regular cancellers were introduced. A few continued life as auxiliary office cachets. Some provisional cachets used in the 1939 invasion may have continued life as an auxiliary office cachet. It should be possible to distinguish their function : a provisional cachet would be
used as a canceller on unoverprinted German or on Hindenburg overprints, while the same cachet used as an auxiliary office cachet would be used alongside (but not cancelling) later issue GG stamps. 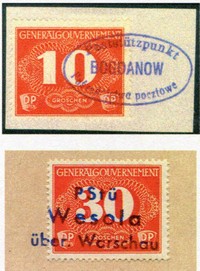 The postal service in German Occupied Poland extended only to the major towns. There was a long tradition of local posts for smaller localities (see our "Poland 1918 Locals" book) and delivery surtax stamps were therefore introduced in 1940 for the rural service. This service organised "postal pick-up points" in villages or suburban branch offices beyond the main post offices.

The Philatelic Service in Krakau also provided "used" stamps on piece, normally in sets of four, with oval cancels in violet, or straightline cancels in violet (these are indicated with *). So far, we have recorded the following "village" cancels as being provided at the philatelic counter :
BOGDANOW
DYMINY
JASIENIEC
KANIE
PASZKOWKA
PRZESLAWICE
PRZEWROTNE
RUDNO
Wesola ³ber Warschau *
ZAHAJKI
These office names are normally in full capitals, but are in mixed case where indicated

Can any reader contribute more "villages" to this list?
If so, please drop me (John Barefoot) a line at JBarefootL@AOL.com. 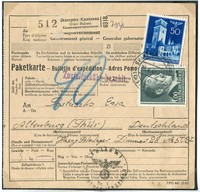 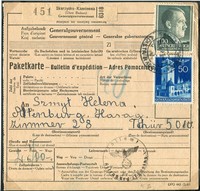 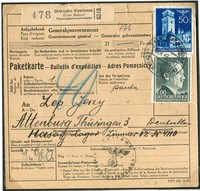 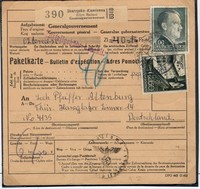 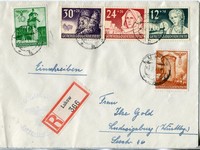 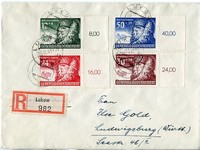 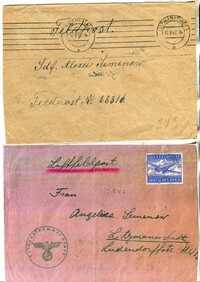 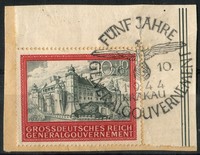 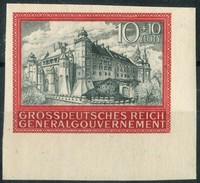